A guide on how to conquer not only in f2p Clan Wars, but also in the wilderness. You must be aware of what's written here in order to be the most valuable of what you can be for your clan.

One of the most important aspects in Free-to-Play (F2P) warring is Clumping. Clumping is holding a specific location with your clan during a fight. A perfect clump will minimize the easy single piles the opposing clan can call. The better the clump, the more advantage the clan will have. It is important to always stick with the group. Clumping makes calling pushes easier and more fluent. It also strengthens our defenses and makes it tougher for clans to push into us.

When pushing you must watch out and make sure that you don't get spread or dragged away from the group. Getting separated can happen very easily, this is why you must always be focused. The strongest pushes happen when the clump remains strong. When we push, push at the same pace as the blue dots on the mini map.

There are two main theories of warring: Scim pushing (front line piling) and Pulling back (stepping back a few steps, clumping up with your bow while attacking your opponent). On a scim push the opposing clan usually spreads out a bit and looses people. The caller usually says what part of their clump you are hitting, it's always the front line though. It's important to pull your scim the same time as your team members in order to 1bang the piles without giving them a chance to tank or eat food.

It is also very important to work as a unit, if a push is called EVERYONE must push with scimitars. If there are people who don't push with scimitars, the ones who do push become sacrificial lambs. This can cause us to lose opts, and in some situations the entire fight. You must be listening at all times.

When pulling back with bows it is important to listen which way you're pulling and where to clump and to get ready for the next scim push. 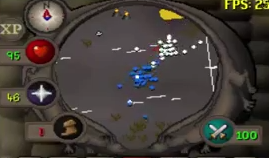 Caller Example: "Pull back with bows north and range south..."

Attention: on the pushes, as well as the pull-backs you always need to attack their front line and try to hit what your friends are piling. If you're getting dragged: you go back to the clump and attack someone else. Don't be afraid to create piles yourself, spam in game what you are hitting ([Clan Initial] piles name).

Although clumping is a very important aspect of F2P warring, it bars a major challenge for all clans. And that challenge is making it easy for members to find and focus on single piles in game. The leaders will be calling movements over TS, but not single piles. This is where In-game calling comes into play. Piling is when multiple members of your clan focus on one member of an opposing clan. When a pile is called you will see things like "@@@@@" or "MM Names In Game". If you aren't on a pile already, look around for piles that are being spammed already. Remember, to stay within the group if a pile starts to drag you out of the clump drop him and find a new pile. If you are separated from the group you will most likely die.

In-game calling is an aspect that can majorly be improved on, and is extremely beneficial.

Luring is for the more experienced F2P warrers, and I don't encourage it unless you are a very confident tank. Luring is essentially running inside of the opposing clan for a second, than running back to our clans clump attempting to drag a few enemies inside of us. If our lurers are aggressive enough they will be able to bring multiple enemies inside of our clump at a time which makes them easy targets for binds and piles.

Binding is very beneficial for most fights. Binding is important because once someone catches a bind that pile has the potential of automatically dying. Binding makes it easier to find piles in F2P because once the clan notices that an opposing player has been bound, it is muscle-memory to pile them. Binding is also crucial for when enemies are being dragged inside of us so they can't drag the people piling them.

Tanking is the act of eating food fast enough to survive being piled. The best way to tank is to spam click Anchovy Pizzas down a line. It is important to assess the situation to determine whether to eat a pizza, half, or a swordfish. Anchovy Pizzas are the best food to tank with in F2P you must use it. Not a confident tank? Start attending inners, you shouldn't be dying with any food remaining in your inventory. You have to tank like your life depends on it, not only because it literally does, but because if it is in a prep/mini or even in the wilderness the longer you tank as the pile it buys your fellow members more time to drop enemy piles.

It is extremely important to understand why you're doing this and why is this important! Your time spent in arena could potentially change the outcome of the fight. If you die - the opponents will find someone else to attack, while we already are down one

However, if you tank and drag them away, you will make them to switch piles. So you wasted their time and you didn't die while someone else on your team was probably killing some of the opponents.You need to understand why is it so important not to die. A one man lead might seem nothing,

but it is still a lead! NEVER STAND OUT and try not to be clearly visible for the opponents, because you're gonna get binded, piled and 1banged. It is important to stay together.

It goes without saying how important overhead prayers are. The right prayer used while tanking will save your life most of the time. You can hear what to pray from a 2nd caller (if not - use common sense). Set your prayer and inventory tab to an F key of your choice and preference. If you're having a hard time doing that, try messing around with it before the prep to warm up your fingers.

Dragging is getting lured into the other clans clump. This is the worst thing that can ever happen to you as you will be an automatic bang. Remember back to clumping, if you spread you're dead. If you're dragged you're body bagged.

Hugging is very beneficial especially in Clan Wars use the terrain around you to make being the pile more difficult or to separate enemy members from their group. Don't drag through open spaces to try and tank, drag into trees or hug rocks.

In other words, Dragging - is an act of running away from your opponent with a purpose of getting rid of them. If you're getting attacked by more than 2 people: run to the back of your clan's clump (not too far) while eating food. In this way you make them to run into your clump with a chance of standing out and getting piled. When you're safe - you eat up to full-ish hp and get back to what you were doing.

By doing so you obviously give an advantage to your clan.

Cycling is a method that has been discovered lately in F2P Warring. When your bows are equipped, and your team/clan is in a clump with most likely 1-2 lines.

If everyone keeps on top of each other, it'll be very hard for the opponent to get a specific pile.

While in CW or fighting in the Wilderness always keep your sound effects as in the screenshot below. 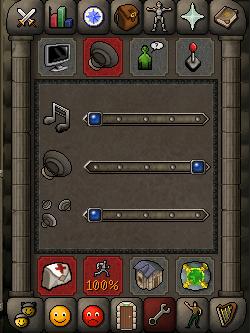 By doing so you will be able to hear when you're being attacked and act faster when tanking and consuming food is concerned.

Crucial to know these by heart.

This little guy will guide you around (near mini-map).

Important: it is a must for you to know all of these things above and use common sense while doing that. Obviously everyone makes mistakes, even those who've been doing this for years. Just don't think you cannot get any better on this, because you can, just do the best you can and improve with each prep.

Also, don't forget to be as fast as you can while doing so, because you're getting yourself killed by being slow.

Use your brain cells and you're gonna win every f2p prep and matched wildy fight.