The Wilderness Guardians, also known as WildGuard or WG, is a primarily-P2P PvP clan founded by His Lordship in December 2003, making it the oldest active clan in Old-School RuneScape. Originally formed as an anti-PKing clan, WG rose to power in 2006, becoming one of the top 5 P2P multi clans at the time. In 2008 WG developed a more community-focused approach, hosting real-life meetings and selling merchandise such as a clan t-shirt. They also received recognition and endorsement from RuneScape creators Jagex, and had a presence at the annual RuneFest event for several years.

WG has remained active in Old-School RuneScape since its release under the leadership of WG Mojo, but maintains a RS3 community under PineappleTom. The clan focuses mainly on multi P2P PvP in the Wilderness, but also hosts a variety of PvM, skilling and community events. WG has has over 300 members, but takes a casual approach to the game with no requirements for levels, gear or activity. Though WG is historically a main clan and continues to compete in main PvP, they also accept and cater for lower-level builds such as Zerkers. The clan abides by a strict code of honour, maintains a neutral status (WG is not part of any alliances) and considers itself first and foremost a community which welcomes players from any background and interests in any aspect of the game. 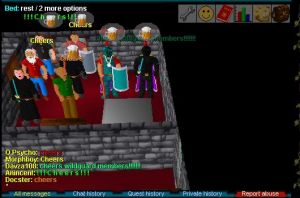 The earliest screenshot of WG, massing for a Raid in December 2003

WG was founded in RuneScape Classic on December 6th, 2003 by His Lordship, after he was PKed while collecting runes at the Dark Warriors' Fortress. Lordship decided to start an anti-PKing clan originally called the "PK PKs", before changing the name to the Wilderness Guardians. Originally an anti-PK clan, WG eventually adopted an ARPK (Anti-Random Player Killing) code, where they would only attack other PKers (identified with a skull), and protect PvMers, skillers and other "innocents" in the Wilderness on ARPKing trips called "raids". The clan developed their motto based on this principle - "We are the Shield of the Innocent", and gained the support of other ARPK clans including The Sabres (RuneScape's first clan). 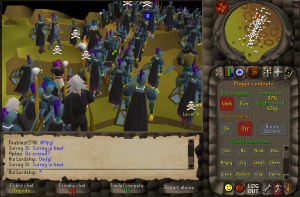 WG transitioned well into RuneScape 2, and had their first war against the Rune Outlaws on November 27th, 2004. They continued to climb in the world of main clans, defeating The Unbreakables. However, they also ran into several issues, such as exodi (breakaway clans formed by ex-members unhappy with WG) including The Revolution and The Synergy. A backstabbing incident within the clan also prompted His Lordship to record a rant directed at the culprits, known as the TeamSpeak Rant, which became one of WG's first viral pieces of media when it was made into a soundboard. WG fought Dead on Arrival on July 9th, 2005 in the first war to use Ancient Magics after their release - though the fight was crashed, the video of the battle became famous throughout the clan world.

In 2006 His Lordship temporarily stepped down, and Tmal34 and Twizzlers300 took over leadership. They pushed WG to continue climbing the P2P ranks, and the clan found themselves challenging the likes of Reign of Terror for the rank of #3 P2P in the summer of 2006. However, His Lordship was unhappy with the direction the former anti-PKing clan was taking, and shut down the clan for a brief period of 3 hours on December 1st, 2006 (known as D-Day). It was the only time WG has closed in its history, and over 100 members would leave over the subequent few days - bringing an end to WG's era as a competitive powerhouse.

His Lordship returned to leadership and attempted to rebuild WG over 2007, releasing a popular animated Flash movie and the first of several recruitment videos featuring himself in real life. However, the clan's success stalled again with the removal of free trade and PvP in the Wilderness on December 10th, 2007, despite their efforts in organising the protests at the time. 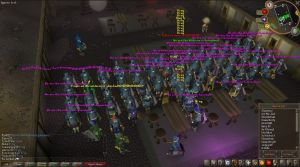 WG continued to fight in the BH, Clan Wars, and later PvP worlds. They also started to take a more community-driven approach, and even hosted the first example of a real life meeting in London on January 12th, 2008. WG would go on to host over 10 more real world events, including attending 3 of the annual RuneFests in 2010, 2011 and 2013. They also developed real-world merchandise, starting with a clan t-shirt which sold hundreds of copies (some of which were also given to Jagex employees), and later clan pens which were handed out at RuneFests.

WG continued to progress in the PvP clan world - defeating Crimson Raiders in January 2009 for rank 10 in the Zybez RAW list, and would reach rank 3 in the Tip.It War Rankings (TWR). They also started to recieve attention and recognition from Jagex for their popularity and longetivity. WG would go on to be featured on the RuneScape main page in newsposts and interviews over five times, came runner up for a Golden Gnomes video entry, had their artwork featured in the 21st Player's Gallery, and even fought against the J-mod-run clan the Pink Patrons of Pain in which they were outnumbered 40 to 100+, and won without a single death.

In 2011 Wilderness PvP was restored, but WG realised that the game experience was not the same as it was pre-2007. His Lordship and co-leader Vio collaborated to make a video documentary titled The Wilderness - An Unauthorised Biography in 2012, which achieved widespread fame and has been cited as influential in both the Evolution of Combat and Old-School RuneScape.

WG maintained a presence in both RS3 and OSRS upon release in 2013, being one of the first clans to host a war in the Evolution of Combat beta (against the BlacKnights) - however, OSRS quickly became their primary focus and their interest in RS3 PvP slowly died down. In 2015, DarkScape was released and WG achieved incredible success in the game - quickly becoming a top clan with over 500 members, and surviving until DarkScape's closure in 2016.

When His Lordship stepped down from active leadership in 2017, PineappleTom took over the RS3 arm, and remains the current serving leader today. As PvP died down in RS3, the clan became more of a social community - serving mainly as a group of friends to hang out with, and hosting occasional events - though PvP is limited to warbands. The clan also maintains a Tier 7 citadel.

WG charges into battle against Reign of Terror in 2013

WG quickly took to OSRS upon release and initially sought to reach their former level of success from 2006. The clan had old members return to activity, saw pulls of over 100 opts for the first time in years, and challenged some of the most powerful clans in battle during the summer of 2013. However the success began to die down at the end of the year.

For the first few years of OSRS, WG tried to maintain a balance between OSRS and RS3. His Lordship also temporarily stepped down from leadership once again in 2014, and Brent147 was promoted to the rank of Leader. He would resign himself later that year, and the current leaders of the clan (WG Mojo for OSRS and PineappleTom for RS3) were promoted to the rank of Advisors (council). They also took part in the 2013 and 2014 Jagex Cup events, with moderate success in the early rounds. In 2016, His Lordship stepped down from leadership to the rank of Founder owing to his busy real life, and the Advisors took up full-time leadership of the clan.

In 2016, WG allied with Vanguard and Red Blade Hunters in the Justice Alliance, allowing the three fairly-small clans to compete on a higher level of PvP. The alliance lasted up until early 2017. Since then, WG has taken a neutral position, and refrained from joining or forging any further alliances. They have also developed a casual approach to clanning - initially allowing Zerker builds to join (after being a main clan for the majority of their history), and eventually removing the initial requirements entirely in 2017 and allowing all players to apply.

Though attendance to all events is optional, WG remains primarily focused on P2P PvP in the Wilderness with PKing trips in the Revenant Caves almost every day, and occasional planned fights.

WG vs The Unbreakables[edit | edit source]

A war between WG and The Unbreakables took place in 2005, and WG started to gain recognition from the wider clan community as a result.

WG fought Dead on Arrival in 2005, in the first war to use Ancient Magics in RuneScape. The war was crashed by Followers of Malkav, and a video of the fight became incredibly popular.

WG has hosted over ten real life meetings around the world since 2008.

WG has attended three Runefest events, and gained recognition from Jagex as a result.

Two large-scale fights were hosted in 2010, and were given special names.

The Great War was hosted against The British Crusaders in an attempt to revive WG's warring capabilities, but ended in a loss.

The Battle of Turning Tides was fought against Dangerous Business and ended the clan's six-month loss streak.

WG fought Poison several times in early OSRS days, the largest of which restored their position as a top P2P clan.

A long-standing feud occurred between WG and the Rune Outlaws for various reasons, and several wars were fought.

CL began a smear campaign against WG in 2005. WG declared war on them, but the fight was cancelled.

RoT and WG were long-standing enemies due to their mutual differences. RoT attempted to crash a war with the Rune Raiders in 2006, and several battles were fought against them during the summer.

In 2009, WG pledged support to The Titans, and made enemies with Divine Forces and Violent Resolution. DF sent spies into WG and hunted the clan, resulting in WG withdrawing from clan politics.

In late 2009, NI crashed a fight with WG's long-standing allies The Sabres which WG was assigned to protect. WG and TS sought revenge, and later cleared NI multiple times while sustaining no casualties.

CD began publicly flaming WG's allies the BlacKnights in 2012, resulting in hostilities and several fights were exchanged. WG attempted to support Poison in a crashwar with CD the following year, but there was little interest.

Hostilities arose between WG and Jaja in 2013, after a fight in which Jaja broke rules. Flaming on the streaming service Twitch resulted in Jaja executing DDoS attacks on the clan forums and senior staff members, but WG did not retaliate.

The TeamSpeak Rant is a recording, later made into a soundboard, of His Lordship angrily confronting clan members after a backstabbing incident on a PKing trip.