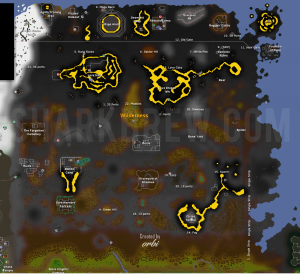 Unlike the towns of Runescape, the scattered buildings and icons of the Wilderness offers a unique challenge to clans who wished to quickly inform members the locations of the wilderness. As a result, Clans had to invent a brevity code designed at naming various locations after the surrounding geographical features or areas of interests.

In many cases, because of the lack of unique surrounding geographical features or areas of interest, some locations are named after common features in the wilderness. Over time, within the Clanning community, it has become the traditionally accepted name for a particular location.

35 Ports are located west of Mossies and North West of Ruins. It's in a single zone and sometimes used for clan re-groups.

Vents are located north of the Ve'nion boss and below the Lava Dragon Isle. It is named after the 2 groups lava holes that look like fissure vents in real life.

A vertical strip line all the way from level 1 wilderness, up to the spider hill, where the multi zone starts. Clans use this location to walk up the wilderness in the single zone not to get hit by their rivals.

Location: north of Edge and a bit south east of the Dark Warriors' Fortress castle. Also a popular clan re-group spot. Single zone. Named "Green Hill" because of the map colour and the trees surrounding the place.

Located just slightly west of the GDZ (Demonic Ruins), while it appears white on the map, it is still quite grey in game. It is a popular destination for F2P main wars.

A portal location a little south east of Rogue's Castle. The portals are in a multi zone at level 50 wilderness, which it was named after. Used to return to fights taking place on the maze hill by many or one of the fastest ways to access deep wilderness without the ancient magics.

A gate north of maze hill. Was named the "New" gate, because it was added to the game after the "old" one was.

One of the three gates allowing players to cross the wilderness fence. A location where most of the oldschool clan versus clan fights used to take place. It was named the "old" gate, because it used to be the only one there.

Named after a mini game that used to be there in pre-eoc called 'Fist of Guthix'. You may find the location south of Chaos temple.

It is located north of black salamander hunting grounds. This location is characterized by the lava flow feature that bears resemblance to that of a mammalian male sperm cell. A poplar location for P2P pure clan pk run-ins to happen. 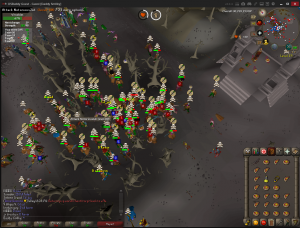 One of the wilderness portals located in 13th wilderness zone south of the Graveyard of Shadows (a.k.a. 'Graves').

A location north of Dwarves. A gap between the two lava rivers.

Portals located in level 18 wilderness, east of the Graveyard of Shadows (a.k.a. 'Graves').

Portals located in level 44 single-zone wilderness, south of the Frozen Base Plateau.

A single-zone location north of Ruins. The area is packed with moss giants while the hunting spot of Black Chinchompas being located south.

The only place in the wilderness where you could find a considerable number of low leveled spiders defending a sapphire gem on the top of a small hill north west of Lava Gate.

Stands for "Greater Demons". This place is named "Demonic Ruins" on the official Runescape map, unfortunately typing the full name of the place is would be too long-winded, this is especially so during clan fights that often take place at this location. You can be teleported there via the Annakarl Teleport on the ancient spell-book after completing the Dessert Treasure quest. Players will have their prayer points slowly recharged while there. GDZ is a multicombat area and is notable for being the only place to find greater demons on free-to-play worlds. 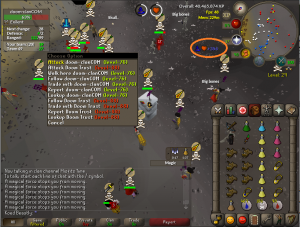 It is named after the Lava Dragons that could be found if you pass through the gate. Active destination of pkers/dragon killers and clans. You may only escape the Lava Dragon Isle via the gate or an agility shortcut located south, requiring 74 agility to cross. Killing lava dragons is known to be one of the best money making methods for players who does not have many quests done or with relatively low stats or defense levels.

One of two places where you can find Chaos Dwarves. Also has a everlasting fire. Be aware of the Vetion boss somewhere around in the pay to play worlds! 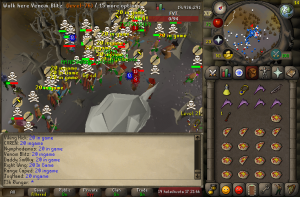 It is a cave of the Corporeal Beast boss. A popular re-grouping place for clans. Games necklace is used to get there. It is a safe zone inside (non pvp worlds), when you come out it takes you to level 20 wilderness.

Sometimes referred to as "rr" or "rox". It is a single zone location north of Lava Maze. Named after the 2 rocks that spawn the coveted Rune Ore. It is the only place that you could mine rune in Free To Play.

Located slightly north west of the actual mage arena. In order to access the bank players must pull the lever (a blade is required to cut through the nets). Even though the lever is in single zone deep wilderness, the bank itself is a safe zone. A popular bank used mainly by hellhound killers/single pk'ers/scorpion or chaos elemental pvm'ers and pvp'ers.

Any competent clanner must know how to return quickly to any of the above locations. A list of returning methods can be found in our Wilderness Map/Returning Guide